Sometimes you run across an individual who champions multiple causes that are near and dear to your heart. Dan Rosenthal is one of those champions.

I spend portions of my life at our condo on the Atlantic Coast of Florida. In the summer months, we keep our interior lights off in the evenings so we don’t interfere with the birthing processes of the Loggerhead turtles. Dan Rosenthal’s mother managed Loggerhead Turtle Watch program on Longboat Key and pioneered the efforts to handle endangered species programs for turtles throughout the state of Florida. While vacationing in St. Maarten, Dan saw a Loggerhead turtle wash ashore and later learned that it had died from ingesting a plastic take-out bag. The fact that he provided those same bags at his restaurants (over 400,000 per year), made him realize that he was playing a role in harming the same creatures his mother had worked so hard to preserve. He had to enact change…

Rosenthal founded the Green Chicago Restaurant Co-op in 2007, in order to provide affordable option for fellow restaurateurs to procure sustainable products and services in volumes that are affordable. The Co-op has evolved into the Green Chicago Restaurant Coalition, which focuses on advocacy and education regarding purchasing sustainable food products and supporting the restaurants that do so. They have tackled such issues as composting, immigration, and the agricultural industry’s impact on consumers and the environment.

What I love most about Rosenthal’s story is that family values often come full circle in creating social entrepreneurship. So many stories about various people who have created responsible business models to help solve problems in our society are tied together by the same golden thread…an awareness that was instilled in them by a prior generation. It is yet another reminder that the greatest accomplishments in life may not always be what we directly create, but how we impact others on a daily basis…how we mold and shape the entrepreneurship of our future generations by instilling the values needed to make a difference. Whatever your values may be, it is a great time to include your children in conversations and activities centered around those values. Sometimes the indirect impact we make is even more powerful than the direct one.

You can learn more about The Rosenthal Group’s most recent green accomplishments here.

Sometimes you run across an individual who champions multiple causes that are near and dear to your heart. Dan Rosenthal...

Since I grew up in California, I was very young when I first heard or read the word “carpool.” Considering that my vocabulary at the time consisted primarily of nouns, the compound word did not make sense to me. Nobody was swimming. Was it a joke about traffic swimming through busy lanes, I thought? Enter Logan Green and John Zimmer. There’s nothing funny about the two young businessmen who propelled carpooling (the verb) down the fast lane of social entrepreneurship.

Logan Green announced his creation of the ‘Zimride’ service in 2007 on Facebook, which was one of the first online ride share companies inspired during his trip to Zimbabwe. The name caught his friend, John Zimmer’s, attention online. The ZIM, however, was just a “crazy, fateful coincidence.” But it was no coincidence that Zimmer had already thought about the transportation challenges facing the US when he took a Green Cities class at Cornell. This class highlighted the fact that 80% of highway passenger seats are empty and the second highest household expense is owning a vehicle. Out of every challenge comes an opportunity.

The two eventually launched Zimride as a social media platform, where drivers could create profiles highlighting their preferred destinations and departure dates. The service then matches drivers and passengers, while allowing for people to post interests and reviews. In many ways, this has created new networking opportunities for those looking to make new professional connections.

Zimride’s success has taken off, becoming the largest service of its kind. There are more than 400,000 users in San Francisco, Los Angeles, Lake Tahoe, Las Vegas, New York and Washington D.C., including 130 university and corporate networks.

The two created Lyft in June 2012. The app provides on-demand, short-distance rides within a city, which organically encourages networking within one’s immediate neighborhood. When they launched Lyft, they introduced the iconic pink mustache logo in an effort to add a fun component and sense of community to the ride experience. And YES, they are big furry pink mustaches that attach to vehicle’s grill.

This is where the future of urban transportation lies…in creative ways that we can all pool our resources to cut costs, build relationships, reduce the impact on the environment and have more fun. So, how many miles have been driven using Zimride and Lyft? Over 200 million miles, which is the equivalent of driving around the world 8,000 times. This has provided saving of over $100 million for the platform users.

I was reminded of how rare carpooling is when I noticed that the carpool lanes in LA require only TWO people. My hope is that Zimride will take off to the extent that major metro markets will consider increasing that number to THREE, which seems much more admirable when it comes to ridesharing. Until then, you can inflate the blow up doll or pick up a hitchhiker to get from A to B faster. Or maybe you can just check out Zimride and Lyft. Your passenger may even throw in some gas money, give you a good review or provide you with an intro to your next boss. Worse things have happened!

Since I grew up in California, I was very young when I first heard or read the word "carpool." Considering that my vocab...

“It Came From Soil. Shouldn’t it Go Back?” 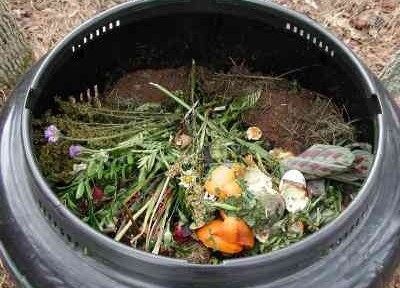 It is time to publicly (and shamefully) admit that I am not a recycler. After years of filling tubs in my hometown, just to see the collector drive around the corner and dump it in a mainstream dumpster, I was disheartened and ended up reverting back to bad habits. “Why am I spending time sorting and why am I paying to fund an unethical business model, solely for the sake of being able to say I am doing the right thing,” I asked? The answer was clear…”most of the time we are over-capacity and unable to handle the volume of recyclables we collect.” Needless to say, that left a bad taste in my mouth and I went from GREEN to a very light shade of sea foam rather quickly. What is sea foam, you ask? Throwing plastic water bottles in recycle bins when available. We all have our flaws, so I ask that you accept my honesty and commend me in that I have called to re-up my membership in the “Circular Arrows Curbside Pick-up Society,” effective this week.

Walker Lunn, CEO of EnviRelation LLC; however, is to be commended for developing a company that has diverted approximately 20,000 tons of food waste from landfills by encouraging restaurants like those at the Ritz-Carlton Tysons Corner in Virginia to focus on organic separation, composting and recovery. Some restaurants that have embraced this same philosophy have cancelled their garbage pick-up completely by generating NO WASTE what-so-ever. Truly amazing!

What is driving this behavior? Two things. Cost savings and environmental stewardship; the latter of which is the primary driver. But let’s be honest…saving a few bucks doesn’t hurt either!

What really impresses me is the power of composting. Composting jenerously keeps trash out of landfills and helps soil retain natural fertilizers, thereby reducing nitrogen runoff into our beautiful US waterways. What does nitrogen do in our water, you ask? It provides a food source to algae, which grows quickly and cuts off the natural oxygen supply in our water, ultimately resulting in stagnant water and death to aquatic life. Quite simply…composting = life.

EnviRelations, the food-only composting company which fuses the words “Environment” and “Relationship,” services Washington D.C., parts of Maryland and is planning expansion into Delaware, New Jersey and Pennsylvania within the next year. While it began servicing hotels, it has expanded to include restaurants, grocery stores and healthcare facilities.

Why I do I love what Walker Lunn has produced, other than the fact that what he is doing by composting is transparent and value-added? He has created a new model of Jenerosity in a category that will shape the environmental future of our world. I have the feeling that this is the type of business model that will grow rapidly, market-by-market, throughout the US as other like-minded entrepreneurs recognize the opportunity that this creates – a true Win/Win for all parties involved, even the consumer. Lunn is helping to develop this industry’s infrastructure and regulatory framework as well.

Thank you EnviRelations for all that you are doing. You have inspired me to be a little Greener. As Kermit said, “It’s not easy being green.” But…companies like yours make it is a little easier than it used to be.

It is time to publicly (and shamefully) admit that I am not a recycler. After years of filling tubs in my hometown, just... 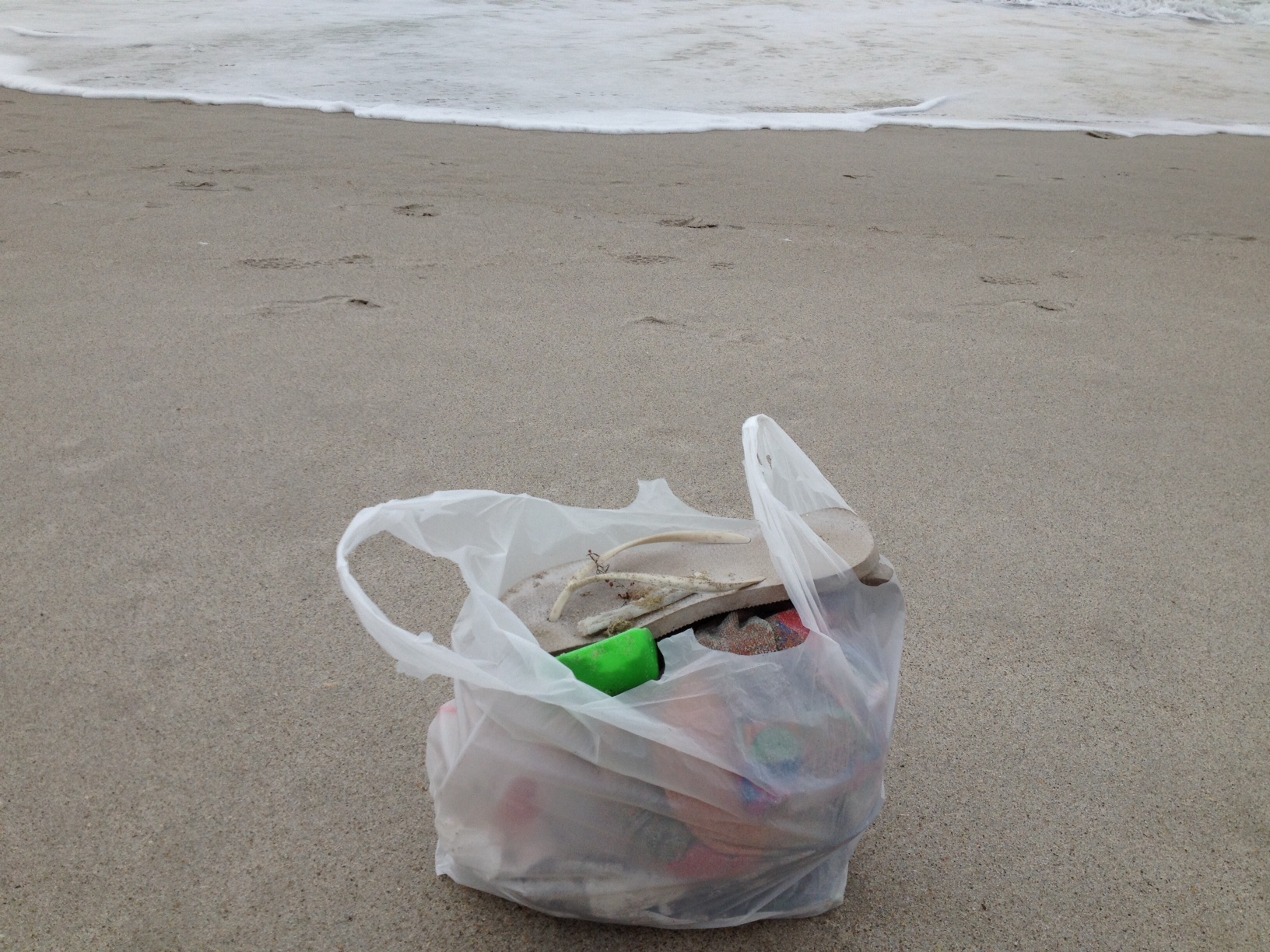 We could have filled at least five more of these bags in such a short distance!

This morning my friend and I went for a walk along the beach and decided to pick up trash along the way.  I usually focus on the natural beauty surrounding me, so I don’t notice the trash that unnaturally lines the coast.  Today, with bag-in hand, I set out on a mission to clean up the beach and it didn’t take long to fill the bag.  I found a curler, old towel, broken hat, flip flops, cigarette butts, bottled water, broken beach toys and MANY old grocery bags. I was amazed at how much trash is sitting quietly, awaiting a swift breeze to pick it up and sweep it into the water.  It felt great to improve my surroundings while out and about.  What a simple way to make a difference.  Bringing a trash bag along with me will now become part of my normal routine.  Yes, the Virgo in me led me straight to the sink to wash up when I got back.  Mission accomplished!

PICK UP TRASH This morning my friend and I went for a walk along the beach and decided to pick up trash along the way. ...