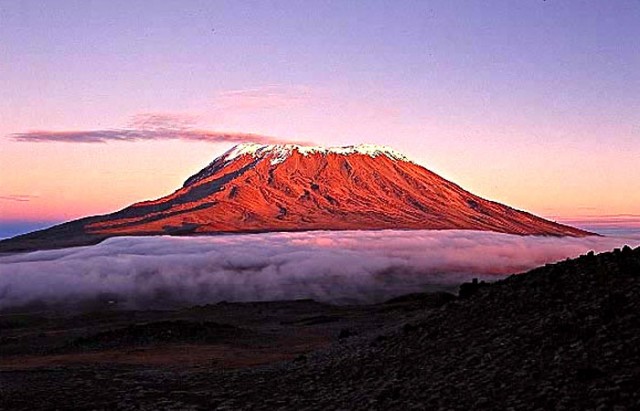 We each have a special purpose; I firmly believe this. Some waste their time searching for it, rather than creating it. Some accidentally stumble upon dumb luck. Others, discover their calling later in life and use their experience to conjure up the courage to relentlessly pursue their passion. But few of us are able to realize it at a young age and work hard enough to achieve these ambitions, often not realizing that the path they are on is intentional and purposeful until it impacts their personal lives.

Meet Dr. Robert Masson, a Central Florida Neurosurgeon, who just climbed Mt. Kilimanjaro at age 50 with a team of 17 to personally raise $20,000 for cancer research via the Livestrong Foundation. I had the pleasure of meeting Rob many years ago, but never knew his personal story until learning about his recent climb.

When Rob was a young medical student, his stepmother died of cervical cancer as his 10-year-old half sisters sat by her side. Fast forward about a decade and his twin sisters were thriving as track stars at Arizona State. Rob was the Chief Resident of Neurological Surgery at University of Florida Shands Hospital and was at the Dallas airport flying to a neurosurgery interview in Seattle, when he was paged over the PA system. He soon learned that one of his sisters had a bad kidney infection and needed a needle biopsy. Listening to his intuition, he got on the last flight to Phoenix so he could be with her and review her case. He knew a needle biopsy was too risky for her to endure, so against the doctor’s advice, he had her flown back to UF Shands where his trusted team of surgeons and advisors were able to perform a 14-hour right kidney resection, which included surgery on a third of her liver. She survived the surgery, then a year of chemo/radiation and even an experimental bone marrow treatment. Calley had a 5-percent/5-year survival projection. Thankfully, she is still thriving and living life to its fullest…traveling, teaching yoga, rescuing animals and loving an active outdoor lifestyle!

Last year, Calley and her twin sister, Christie, watched alongside Rob and his brothers as their father tragically lost a 13-year battle to prostate cancer.

Rob’s commitment to medicine, and his pursuit of purpose, saved his sister’s life. He has endured so much loss, but continues to work hard through his career and through his recent personal achievements to help those who, like his family members, face cancer. Dr. Masson serves as a reminder to us all that pursuing our purpose often serves a greater purpose than we may realize at the time. Listen to that inner voice and pursue your dreams. That voice is there for a reason. 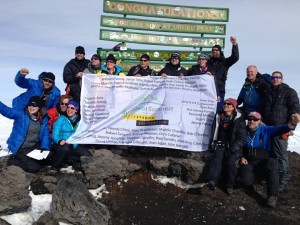 We each have a special purpose; I firmly believe this. Some waste their time searching for it, rather than creating it....

Jenerosity is a wonderful thing, but it has to be meaningful in order for it to be worthwhile. Today, there is an article about the overwhelming donations of used clothes pouring into Oklahoma. While that sounds great, the people in need don’t even have closets!

One thing I have learned from working at the food bank is that cash is king when it comes to charitable giving. For example, in our region, the food bank can turn $1 into 7 meals. If I were to go to the grocery store to buy $1 worth of food to donate, I might walk out with 2 boxes of Mac and Cheese if there is a BOGO offer. What I would spend in gas to get that food to the food bank is probably more than what I would spend on the food alone. Instead, it would make more sense to get online and donate that dollar. Let the experts source the food and provide much more to the community. BONUS: Take the ambiguity out of an IRS audit also.

Bottom line…while you may think those jeans from 2002 are valuable in Oklahoma, they really aren’t. Donate them locally and text REDCROSS to 90999 to donate $10.

Same logic applies to wedding gifts. Buy something from the registry that the couple wants/needs or send cash…unless you are willing to send an original Van Gogh. I might consider getting married again for that!

Jenerosity is a wonderful thing, but it has to be meaningful in order for it to be worthwhile. Today, there is an articl...

What a great idea!  Check out I Like Giving.  This organization calls people to action and allows them to share their stories (big and small) to, in turn, encourage others to be Jenerous.  They have a 3-Day Giving Experience that you can sign up for online.  For the next three days, they will email you a daily giving challenge to complete.  I will keep you posted on my progress. For example, I really like this idea of dropping bills with positive words of encouragement attached.  Maybe in a park where homeless people tend to gather, or near a school in a low income area?

Some people have criticized those who post acts of Jenerosity online as not Christian or self-promoting.  I have struggled with that as well, as I respect the authentic Jenerosity behind anonymous giving; however, I believe that the power to make significant change by motivating others into action, more often than not, outweighs the perceived arrogance of public acknowledgement.  What is your take?

What a great idea!  Check out I Like Giving.  This organization calls people to action and allows them to share their st...

Angels in Honor of the Sandy Hook Children & Teachers

I can’t just sit here and look at the pictures of the 20 children who were killed in Newtown, CT.  I have to do something to honor their lives.  Today, I was sharing the same sentiments with my friend, Kimberly Davis.  Kimberly told me that 26 Christmas trees were anonymously donated from North Carolina in honor of each of the lives lost.  Those trees have been placed along the road to Sandy Hook Elementary. 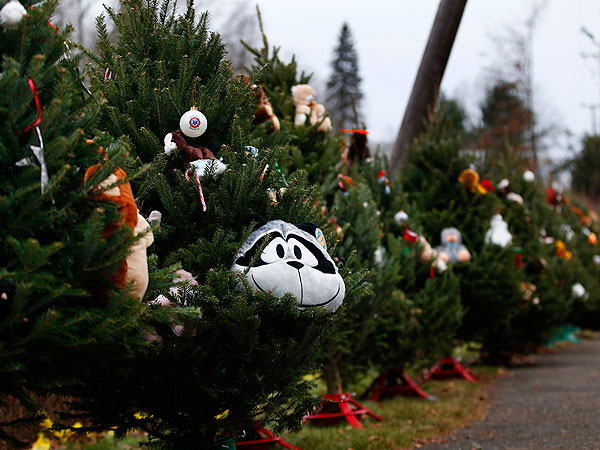 Kimberly had an idea to donate 26 angel ornaments to adorn each tree.  I suggested we go BIG and send one to each of the families as well, so that they will have a matching ornament to place on their tree each year.  Time is of the essence!

Kimberly and I are making a personal request for 50 people to join us in purchasing an Angel Ornament to be sent to Sandy Hook Elementary to decorate the trees and provide to the families. Nobody will profit from this effort; it is simply an act of Jenerosity. We are both purchasing Arbonne Angel ornaments on behalf of our families and Kimberly is covering ALL shipping costs for the ornaments. The cost per Angel ornament is $38.

The glass Arbonne Angel sparkles with hope and shines a light on the future. With kindness and Jenerosity, the Angels strive to make the world a better place.

We hope to have all 52 ornaments purchased by Wednesday afternoon so that they will make it to Sandy Hook by Christmas.  We will be accepting credit cards to expedite payment, so please message me if you would like to provide an Angel in honor of these victims.

Nothing can be done to reunite these devastated parents with their beautiful children.  Our hope is that random acts of kindness can remind them that they are not alone and that their children will not be forgotten.  Maybe some comfort can come from simple acts of Jenerosity.  I am sure that those beautiful souls are with their Angels in heaven right now.  Please help us spread those wings here on Earth.

I can't just sit here and look at the pictures of the 20 children who were killed in Newtown, CT.  I have to do somethin...

It is never too early to start logging your community service hours and if you are 10 years old with a goal of getting into University of Florida, you might want to think about starting NOW!  My son wants to be a Gator and knows he has to earn his way to crocodilian status.  We are working now on improving his curriculum vitae.

Brooks recently celebrated his 10th birthday, which was a significant milestone.  Not only is ten “double digits,” but it is also the minimum age required to volunteer at Feeding America Tampa Bay.  I love food; my son loves food.  I work for Feeding America; now, my son volunteers there. 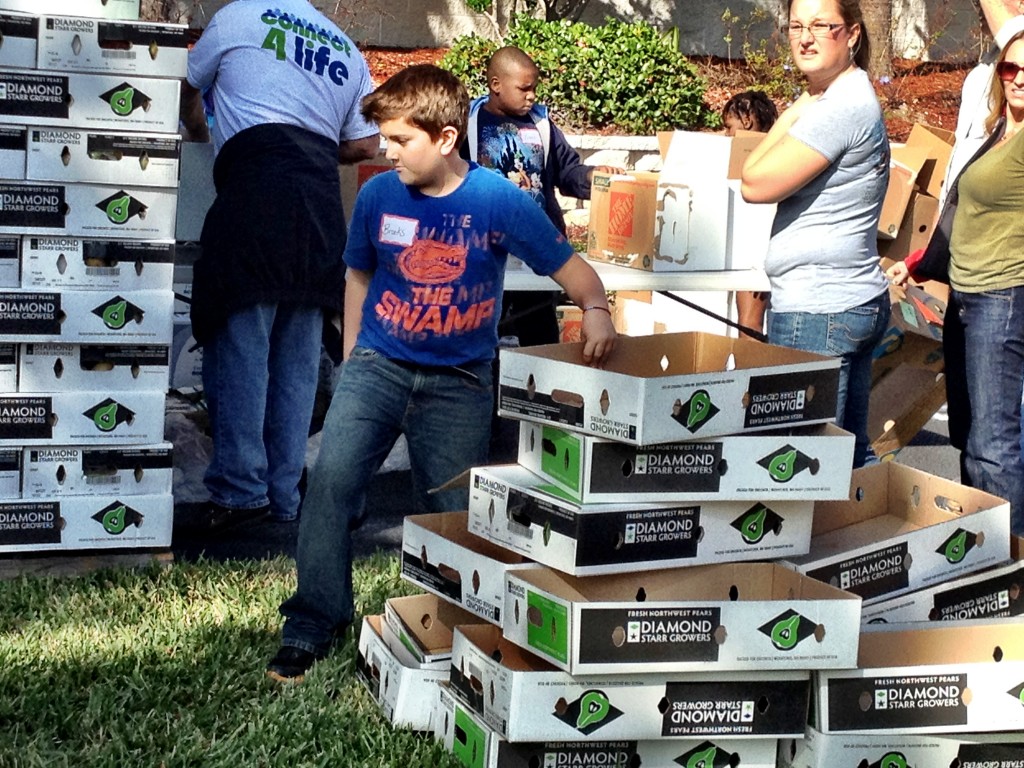 Brooks moves boxes in his University of Florida “swamp” shirt.

A few weeks ago, Brooks worked at a Mobile Pantry location where we delivered over 300 boxes of food to hungry families in less than two hours.  He was in charge of separating and moving boxes.  In full-blown, sweaty work-mode, Brooks managed to show his leadership and delegation skills like I had never seen before.  I was incredibly proud!

Yesterday, he joined me at a local Winn-Dixie Supermarket to collect donations and sell Empty Bowls made by local students.  These beautiful handmade bowls are each a precious work of art and represent the 700,000 bowls that go empty each day within our community. Each one is so unique.  It was fun to see people struggling over which bowl to select.  There are many uses for these bowls: decoration, jewelry holder, salt and pepper containers, soap dish, and ASHTRAYS.  Wouldn’t those children just love to know that they poured their hearts into making ashtrays!?!  The dentist in my family will get this fabulous bowl in her Christmas bag this year… 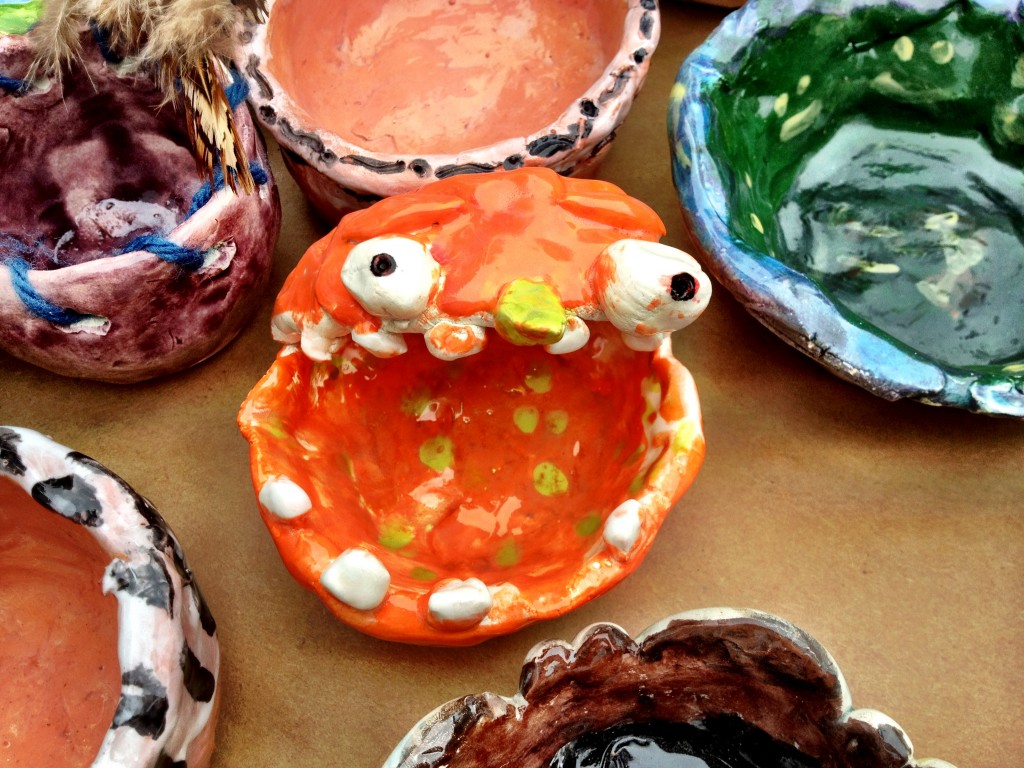 Who can resist a monster bowl with teeth like that???

My son got an introduction to the public this weekend.  He was surprised by the Jenerosity displayed by so many people who had so little.  These sweet bowls made by sweet children made people smile.  Just one day after the horrific shooting at Connecticut’s Sandy Hook Elementary School, we found ourselves remembering the innocence of those schoolchildren.  So many people wanted a little token of love from a child to take home with them - a symbol of purity, Jenerosity and good nature.  We long for a life filled with more monster bowls and fewer senseless tragedies…where children can realize their dreams by working hard and improving the world around them…where they can plan what they want to be when they grow up and attend the college of their choice, even if their endeavors are reptilian in nature!

It is never too early to start logging your community service hours and if you are 10 years old with a goal of getting i...