GIVE A THOUGHTFUL GIFT

We moved into our new neighborhood 18 months ago and my son, Brooks, met his first neighborhood friend, Jason Wallace.  My husband, whom I affectionately call “Hector the Collector” enjoys collecting many things in the music, sports and movie genres.  When I met him, he was collecting small ceramic David Winter houses, so his collections have improved greatly…and his nickname has evolved from “Grandma” to “Hector.”  My “Hector” has a replica sword collection from many popular movies.

The first time Jason came to the house, Brooks decided to take him on a tour of the memorabilia.  When they got to the sword collection, the conversation went something like this:

Jason: “Braveheart?  Is that William Wallace’s sword?  <Brooks nods> If it is, that is my great great great great grandfather’s sword!  That should really belong to me!  Do you know what that is worth?  Probably like a million dollars!”

Brooks:   “Well, it isn’t worth that much, but maybe something like a few hundred thousand.”

At this point, I knew it was my time to intervene and explain that these were very affordable replica swords.  Nevertheless, Jason fell in love with the sword.

This Christmas, we thought it would be fun to get Jason his own Braveheart sword.  He came over on Christmas Eve and opened up his gift.  His jaw dropped and he kept asking, “this isn’t what I think it is?”  It was a Christmas Story moment, but instead of “You’ll Shoot Your Eye Out” it was “You’ll Chop Your Foot Off!”  He began swinging the sword around and insisted on walking the two blocks home, flailing all the way.  I bet if you listened closely, you might have heard the Scottish ghosts screaming “FREEDOM!”  He forgot his sheath and came back later to get it.  Exhausted from carrying the heavy sword around the neighborhood, he fell asleep hugging it on the couch.  Our friends who were over at the house still tell the story about Jason’s sword and the spirit of Christmas.  His joy was a reminder of the magic of the season! 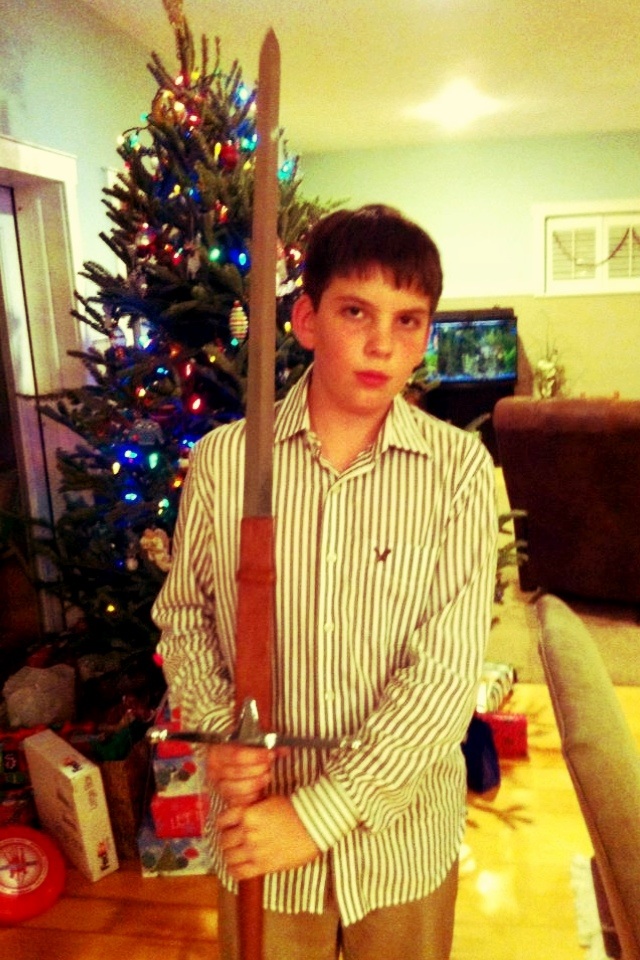 Mr. Wallace is smiling on the inside as he shows his mom the replica of his family’s sword.

The next night at dinner, my husband told us that he was saddened to hear that Jason had been at the hospital all day because he fell asleep with the sword and accidentally cut off his toe.  My mom gasped with concern!  I guess she still isn’t quick to recognize Scott’s sense of humor after all of these years.

What is the most thoughtful gift you ever received?

GIVE A THOUGHTFUL GIFT We moved into our new neighborhood 18 months ago and my son, Brooks, met his first neighborhood f...